Arrival to MASHHAD. In the afternoon we visit IMAM REZA Shrine the most sacred place in Iran. Shiite people from around the world get together in this vast and spectacular shrine as pilgrim and also tourist. Imam Reza was the eighth Imam of Shia and one holiest figure for Muslims.

In the morning we have an excursion to NEYSHABOUR to visit Khayyam & Attar mausoleums. Nishabour is a literary hot destination of Iran. Khayyam is a well-known philosopher, mathematician and poet of the 12th century famous for profound philosophical ideas. Attar is a great Iranian mystic and a prolific writer on mysticism living in 12th century.

Today we drive to BASTAM in SEMNAN Province.  Bastam is a small town, the burial place of Bayzid Bastami, a highly revered mystic or master sufi of 9th century. He introduced the concepts of Shur or Wajd a means of self-annihilation in the Divine Presence of the God.  His shrine draws many Sufies and other visitors from around Iran and even beyond.

In the morning we drive to Abr Forest (Abr means cloud). It is one of the most scenic natural settings in Iran where we can have and joyful walk over the clouds and through a thin forest. To lunch we picnic. After lunch we visit Sheikh Karaqani Shrine a 10th century Master Sufi with deep knowledge of Quran and Hadith, despite his illiteracy.

Drive to Tehran. En route visit to the city of DAMQAN.  In Damqan we visit Tarikhane Mosque, Pir Almdar Tower and Chehel Dokhtaran Tower.  Tarikhane Mosque is the known as the oldest mosque in Iran going back to 8th century. It may have been a fire temple at Sassanid era. Pir Almdar Tower is an exemplary architecture of a mausoleum.  Chehel Dokhtaran (of forty girls) is an old monument a story that 40 girls become ascetics and took refuge in here. Later on, the tower became a respected place for single young ladies.

Today we have a full day city tour of TEHRAN. We visit National Museum, the oldest museum of Iran; Golestan Palace, the only world heritage site of Tehran; Crown Jewels Museum, a priceless museum with so many valuables left behind from past Persian royalties; Milad Tower, the tallest free structure in Iran towering the city of Tehran.

Drive SAREIN. A small town in ARDABIL Province and the main spa destination in Iran. En route we visit Soltaniye dome in ZANJAN. This mosque-like mausoleum built upon the order of Oljaytu, Ilkhanid Mongol ruler of Persia, in 14th century. Soltaniye is a world heritage site and the burial place of Oljaytu himself. Then, we visit Chalab Oghli Khanghah, an old Sufi retreat built in 14th century. In Sarein we relax using its hot springs and mineral waters.

Drive to Tabriz. In Tabriz we visit Blue Mosque, a wonderful mosque known as the turquoise of Islam due its numerous blue tiles. Close to Blue Mosque there is Azerbaijan Museum, the second most important archeological museum of Iran after National Museum in Tehran. The last but not the least site is Grand Bazaar, a world heritage site and the largest roofed bazaar in the world. 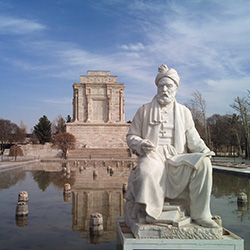 Great Khorasan, was a cradle for literature and spiritualism during Iran’s history, a place for the great ethic poet of Iran, Ferdowsi, to raise his legendary characters of the story to protect the People, a homeland to the victorious great kings to reign, and a vast field for the mystics to traverse their path to Read more 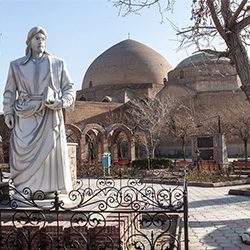 Tabriz, the connecting gateway of the west and east civilization through the history, located through the Silk road, opening the doors of orient to the people travelling with any desires to the Asian Countries, has experienced a lot of events and was playing a great role on Iran’s destiny throughout different eras. Being considered as Read more 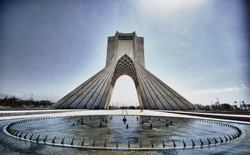 Traveling to a country, is normally started with its capital as the most important city of the destination, where the economy’s heart beats. Visiting Tehran is necessary when traveling to Iran not only because of capital being, but because of the great museums, Royal palaces, Ski slopes, natural landscapes and on top of all, the Read more

We are sorry, there are no reviews yet for this tour.